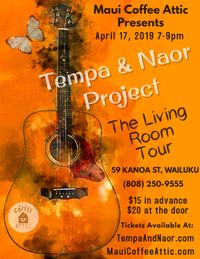 Tempa & Naor released their latest original album “Ember's Fire” in November 2018 at the Maui Coffee Attic with a sold-out show. They will be back on Maui in April 2019 to perform an intimate show at the Maui Coffee Attic as a part of their ongoing Living Room Tour. They will be performing songs from Ember's Fire and songs from their new album that is to be released later this year.